The waste to energy market is evaluated at US$32.766 billion for the year 2019 growing at a CAGR of 5.89% reaching the market size of US$46.192 billion by the year 2025. Waste to energy refers to a process in which energy is generated in the form of electricity or heat which is done through the processing or treatment of waste. In other words, waste to energy refers to the technology which converts waste into a fuel source. It is also known as the recovery of energy. The majority of the electricity or heat is produced through direct combustion, however, often a combustible fuel commodity is often generated through the treatment of waste such as ethanol and methane among others.

The waste to energy market is poised to show significant growth throughout the course of the next five years primarily on account of the growing concerns regarding the proper disposal of waste along with the growing focus towards the generation of clean energy in many parts of the world. This advanced technology helps in reducing the waste disposed of to landfills thereby reducing greenhouse gases. Furthermore, it helps in the recycling of waste, which also reduces the harmful impact of waste on the environment. The waste to energy facilities is often considered as the only facilities that help to mitigate the adverse changes in the climate as it reduces the burning of fossil fuels and can further reduce the minimize the harmful emissions being done to the environment. Various governments across the globe are taking the necessary steps in order to protect the environment that has also led to an upsurge in the investments being done in waste to energy facilities in both developed and underdeveloped economies, which, in turn, is playing a significant role in shaping up the market growth throughout the forecast period. Furthermore, the increased focus towards waste management is further positively impacting the market growth as numerous regulations are being implemented in many countries for the proper disposal and treatment of waste for energy generation purposes on account of the availability of limited land area in many parts of the world.

Governments are taking necessary steps to implement numerous sustainable and effective waste management solutions and waste to energy is considered an integral part. With the growing focus towards renewable energy, rising fossil fuel prices, and also to reduce the dependency on fossil fuels various alternative sources of energy are being invested in many countries. Several regional governments are investing in WtE facilities to avail of the benefits out of it. For instance, in January 2020, Indian Railways announced the opening of its first-ever waste-to-energy plant in Bhubaneswar as its first step towards sustainable development. Also, in October 2018, ACCIONA, a Spanish conglomerate that is primarily dedicated to developing and managing infrastructure for renewable energy announced a project worth $700 million Australia's first large-scale thermal Waste to energy plant with an aim to reduce landfills and also to produce renewable energy. The plant has the capacity to process 400,000 tonnes of waste per year. Similarly, in March 2017, the North Delhi Municipal Corporation announced the launch of India's largest waste to energy plant at Narela-Bawana with a capacity of using around 2,000 metric tonnes of waste every day and produce approximately 24 MW of energy.

However, the advent of the novel coronavirus disease is anticipated to restrain the market growth to some extent as the outbreak has led to a halt in the industrial activities in many parts of the world due to the shortage of labor as well as non-availability of the raw material due to the disruption in the supply chain activities. Furthermore, a slight decline in the demand for energy as well as the economic breakdown in many countries has led to an adverse impact on the investments in new projects which in turn is projected to inhibit the market growth to some extent especially during the short run.

Rapid urbanization and industrialization are playing a significant role in the global waste to energy market.

One of the key factors that are anticipated to propel the business growth opportunities for the manufacturers is the rapid urbanization and industrialization in both developed and developing economies of the world. With growing industrialization and urbanization, the generation of commercial as well as residential waste has also increased significantly. Additionally, the continuously rising demand for energy across the globe on account of rising population and rapid industrialization and urbanization is one of the key drivers for the market growth throughout the forecast period. The burgeoning demand for strong heating and cooling needs in some of the regions is also projected to be one of the factors responsible for boosting the demand for energy. According to the IEA, the energy demand globally increased by 2.3% in 2018, which was considered at the fastest pace in this decade. Also, the movement towards sustainable development is also projected to boost the investments in clean energy projects in many countries, which is thereby expected to increase demand for waste to energy systems in the next five years, thus, positively impacting the market growth throughout the course of the next five years.

The governments around the globe are implementing numerous strategies which are further aimed to reduce the dependency on fossil fuels owing to the high environmental impacts as well as costs. The growing prices of fossil fuels along with their adverse effects on the environment have led to an upsurge in the dependence on clean energy which is further expected to boost the waste to energy market growth in the coming years. Fossil fuels have continued to play an important role in the global energy system. Fossil fuel energy is considered the fundamental driver of the industrial revolution. However, the use of fossil fuels has negative impacts on both the environment and the economy. In addition, the growing need for electricity further increase the use of fossil fuels for power generation, which is further costly in comparison with renewable sources of energy. Due to the high prices of fossil fuels, many regions across the globe are moving towards alternative sources for electricity generation. Which in turn is anticipated to positively impact the market growth in the coming five years.

Thermal technology is estimated to hold a significant market share.

By technology, the waste-to-energy market has been segmented into thermal and biological. The thermal waste to energy technology is expected to hold a substantial share in the market primarily due to its simple process and being environmentally friendly, due to which it is highly adopted. Furthermore, this technology further allows complete combustion of gases that are released from the waste, further making it more efficient and suitable. However, biological technology is anticipated to show substantial growth during the coming years owing to growing investments in R&D under this segment. Also, the growing focus towards the adoption of organic approaches for the disposal of waste due to less adverse effects on the environment is also one of the key factors supplementing the growth of this segment throughout the forecast period.

The Asia Pacific region is expected to witness promising growth over the forecast period.

On the basis of geography, the waste to energy market has been segmented into North America, South America, Europe, the Middle East and Africa, and the Asia Pacific. The European region is projected to hold a considerable share in the market throughout the course of the next five years majorly due to the favorable government policies that further support the investments in waste to energy plants such as landfill taxes and carbon taxes among others. However, the APAC region is anticipated to show promising growth opportunities for the manufacturers over the next five years due to the inclination of the government towards waste management and increasing investments in waste to energy projects in the major emerging countries like India, China, and Indonesia among others. 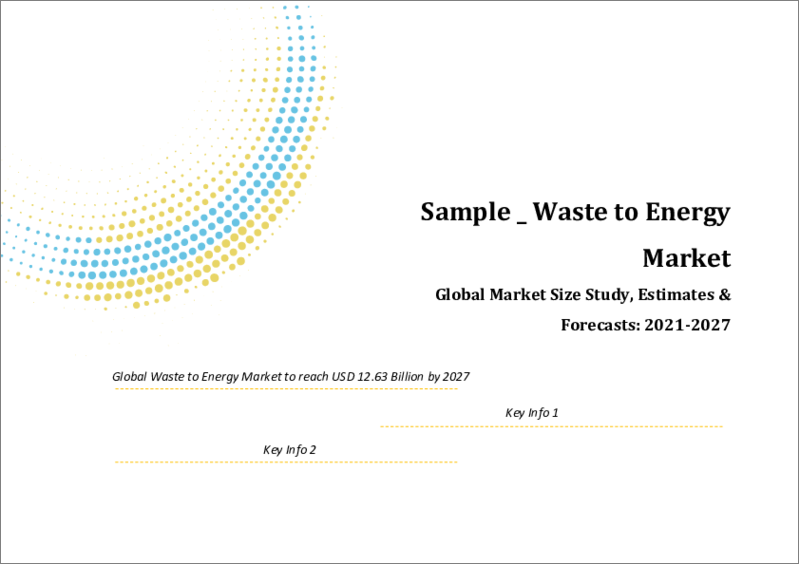