The entertainment robot market is projected to grow at a CAGR of 21.78% to reach US$9.732 billion by 2026, from US$2.450 billion in 2019. Entertainment Robots are machines created for the sole goal of amusing people rather than for any practical function. Sensors, microphones for speech recognition, and cameras for facial recognition are all included in these robots, allowing them to communicate with people. It may be programmed to perform a dance routine, sing, participate in a trade show or perform multimedia jobs, among other things. It's commonly utilized in the construction of narrative worlds as well as in the sphere of cultural entertainment. The development of entertainment robots with artificial intelligence is a significant driver propelling the entertainment robot industry forward. Furthermore, increased R&D spending leads to constant technological innovation, which will boost the market growth in the next years. Other key drivers of the entertainment robot industry are shifting consumer lifestyles as a result of increased urbanization and people's increasing disposable money.

The market for entertainment robots is expected to expand as artificial intelligence technology advances, the senior population grows, and the demand for animatronics rises. Robot vision, machine learning, and cognitive computing are all included in the entertainment robots, which aid in learning and communicating with one another, as well as decision-making. This is an excellent component for propelling the sector forward. On the 9th of January 2018, Sony Corporation launched an entertainment robot that used artificial intelligence and analytics to control the robots' motions. The development of humanoid robots is one of the most important developments in the entertainment robotics market. Sarcos Corp., located in the United States, has created smart and successful humanoid robots as well as virtual reality platforms. The firm creates entertainment robots that are both sturdy and hypersensitive.

Geographically, the European entertainment robot industry is driven by high disposable income and the presence of a developed market. Also, as a result of the arrival of a number of well-known worldwide suppliers, the market in this region will continue to develop steadily. Similarly, the geographical market share of the North American Entertainment Robot market is influenced by the early acceptance of technology and fast-speed developments, as well as substantial R&D expenditure in robotics. Due to rising consumer purchasing power, the APAC market is estimated to develop at a high CAGR throughout the forecast period. The expansion of the APAC Entertainment Robot market is aided by the increasing number of players in Japan and South Korea.

One of the major reasons for the growth of the entertainment robot market is growing technological advancements coupled with the increasing investments in the research and development of artificial intelligence technology and its use in children's toys, as well as increased demand for animatronics in the coming years. For instance, Amazon debuted Astro, its first home robot, in 2021. Astro is a three-wheeled robot that can transport items from room to room, video chat, play music, keep a watch on your house while you're gone, and more. Astro is a mash-up of a number of Amazon's other devices mounted on wheels. Astro also provides information regarding sports scores or the weather and enables the users to see movies or other entertainment shows.

Promising growth potential is shown by the industry

With increasing automation across several industry verticals, the entertainment industry has been increasingly adapting entertainment robots for better efficiency and lower risk to lives. Furthermore, the growing adoption of these robots in the household sector is expected to support the market. Data from the International Federation of Robotics shows that the number of entertainment robots in 2019 was 4.6 million units which increased to around 5 million in 2020. This number is further projected to reach 6.7 million units by 2023.

Impact of COVID-19 on the Entertainment Robot Market 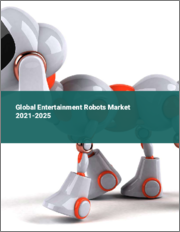